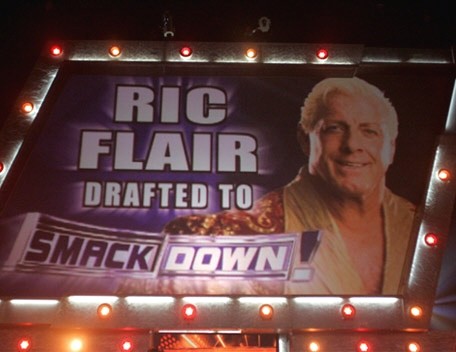 ON WWE RAW LAST NIGHT ON THE HISTORIC DRAFT SPECIAL THERE WAS ONE NAME WHO MADE THE SWITCH FROM RAW TO SMACKDOWN, I THINK YOU ALL MAY HAVE HEARD HIS NAME BEFORE, IT IS RIC FLAIR!! THAT'S RIGHT LADIES AND GENTLEMEN, THE "NATURE BOY" IS HEADED TO FRIDAY NIGHTS.

I KNOW ALL OF YOU ARE WANTING TO KNOW THE WEBMASTERS OPINION ON THIS SHOCKING MOVE, WELL I AM GOING TO GIVE YOU MY OPINION, I LIKE IT, DON'T GET ME WRONG, I HAVE BEEN CRITICAL OF SMACKDOWN IN THE PAST BUT THAT WAS THE PAST.

I REALLY THINK THAT IT IS EXACTLY WERE RIC FLAIR NEEDS TO BE RIGHT NOW, FOR STARTERS HE HAS NEVER BEEN A ACTIVE WRESTLER ON SMACKDOWN BEFORE, HE WAS ON SMACKDOWN BEFORE BUT THAT WAS IN EARLY 2002 WHEN HE WAS THE GENERAL MANAGER AND BEFORE THE SPLITTING OF THE BRANDS,AND DO I HAVE TO TELL ALL OF YOU ABOUT THE MATCH  UPS HE COULD HAVE THERE.

ON THE GUESTBOOK I SEE A LOT OF YOU MENTION THAT YOU WOULD LIKE TO SEE A FEUD BETWEEN FLAIR AND FIT FINLAY, I THINK NOW WE WILL SEE THAT, BUT WHAT I PERSONALLY WOULD LIKE TO SEE IS A MATCH UP BETWEEN FLAIR AND WILLIAM REGAL, NOW I KNOW A LOT OF YOU OUT THERE ARE READING THIS AND YOU ARE SAYING HOW CAN THE WEBMASTER OF A RIC FLAIR WEBSITE LIKE WILLIAM REGAL, BUT JUST KEEP READING AND LEARN SOME THINGS.

WILLIAM REGAL (FORMERLY KNOWN AS "LORD STEVEN REGAL") FROM THE OLD WCW DAYS IS A EXCELLENT SCIENTIFIC WRESTLER, HE HAS NEVER GOT THE PUSH THAT HE DESERVES IN MY OPINION, SOME OF THAT IS BECAUSE OF INJURIES BUT REGAL IS NO DOUBT ONE OF THE BEST SCIENTIFIC WRESTLERS OF HIS ERA. WHEN HE WAS IN WCW I LOVED TO WATCH HIM WRESTLE, NIGHT IN AND NIGHT OUT HE WOULD USUALLY BE INVOLVED IN THE TOP TWO OR THREE MATCHES ON THE CARD,WERE HE LACKED IN CHARISMA HE MADE UP FOR IN WRESTLING SKILLS.

BACK IN 1994 FLAIR AND REGAL HAD SEVERAL MATCHES AT THE ORLANDO, FLORIDA DISDNEY MGM STUDIOS THAT AIRED ON TV AND ALL OF THEM WERE GREAT MATCHES, I HOPE THAT THEY WRESTLE AGAIN ON SMACKDOWN BUT TO REALLY DO THEM JUSTICE YOU GOT TO GIVE THEM AT LEAST 15 TO 20 MINUTES BUT WITH TODAY'S WRESTLIJNG ENVIRONMENT I AM NOT SO SURE THAT WWE WILL DO THAT.

THE ONLY THING THAT REALLY BOTHERS ME IS THAT I AM USED TO WATCHING WRESTLING ON MONDAY NIGHTS INSTEAD OF FRIDAYS BUT THAT WILL HAVE TO CHANGE A LITTLE WITH THESE LATEST DEVELOPMENTS. I READ A ARTICLE ON THE INTERNET OTHER DAY BY A GUY NAMED DOUG AND HE IS TALKING ABOUT HOW IT WOULD BE GOOD FOR RIC FLAIR IF HE WENT TO SMACKDOWN.

I SHOULD HAVE PUT THE ARTICLE UP EARLIER BUT I THINK NOW IS ALSO A GOOD TIME TO POST IT EVEN THOUGH THE DRAFT IS OVER BECAUSE IT MAY ASSURE EVERYBODY WHO MAY BE AGAINST FLAIR GOING TO SMACKDOWN THAT IN THE LONG RUN IT WILL BE SEEN AS A GOOD MOVE. SO SCROLL DOWN AND READ THIS GREAT ARTICLE, AND REMEMBER FLAIR FANS, DON'T MISS SMACKDOWN ON FRIDAY NIGHTS BECAUSE FOR THE FIRST TIME EVER SMACKDOWN IS THE BRAND TO WATCH, COURTESY OF THE "NATURE BOY" RIC FLAIR!!! WOOOOOOOOO!!!

Ric Flair should go to Smackdown and here is why

Time to address the star power issue right off the
bat. Ric Flair is still  the most recognizable
name in wrestling, and still something of a ratings
draw, despite his character being treated unfairly
over the past few years. Hes never competed
as a wrestler on Smackdown. Hes been on Raw since
the original brand split back in 2002. And we know
why that is. Triple H wanted his childhood idol around
him. Well its time to do something for the good of
the company, more specifically for the Smackdown
brand, and send Flair to Friday nights. He could use
the change of scenery, and Smackdown could certainly
use him.

What Ric Flair has to offer is his name, and what his name
means to wrestling fans all over the world. Hes someone
that people still love to see, and they still go crazy every
time he comes out. They are always into his matches. Ric
Flair brings excitement wherever he goes, and hes
as big a legend as there is active in the wrestling
business today. Hes a big name, and gives
Smackdown an instant boost of star power and
credibility.

Plus there are guys on Smackdown that Flair hasnt had
the opportunity to work with much over the years.
Edge, Fit Finlay, William Regal, Kane, Matt Hardy,
Booker T (when he comes back from his injury), Rey
Mysterio (same as Booker), and The Undertaker (see
Booker and Ray). These would all be fresh feuds for
Ric to work. You look at the Raw roster, you dont
see too many fresh feuds. Flair can slide into a top
face role behind Batista and Rey, and Undertaker later
in the year.

And hey, maybe Michael Hayes will actually let him
talk on the mic from time to time. Flairs lack of
mic time on Raw has been one of the most absurd things
ever. Imagine having an actor like Al Pacino or Jack
Nicholson in your cast for a movie, and then giving
them a non-speaking role. Flair is considered by many
to be the best mic worker in the history of wrestling.
His skills in the ring may not be as good as in past
years, and he may not do near as many moves as he
used to, but he can still talk them in the
building. Hes been a mute on Raw. Just Standing there
while people turn on him. It makes me
sick to see him treated like that. He deserves
better, and hes earned better.

Its a pretty radical move, but I think sending Flair
to Smackdown would benefit everyone. It would give
Flair a fresh coat of paint, and god knows Space
Mountain could use it. Plus it helps give Smackdown a
huge boost of star power, and maybe just maybe, it
will be a reason for more people to tune into the show. Its
worth a try. Thinking out of the box. Remember that.