The pictures below the article are from the NWA Legends Fanfest Convention that was held in Charlotte, N.C in 2009. It was a historic event mainly due to the fact that it was the first time the Original Four Horsemen group has been together since 1986. Enjoy the pictures below........

Starrcade '83: The show that almost wasn't

Had it not been for Harley Race's principled resistance to the entreaties of Vince McMahon and his World Wrestling Federation, though, Starrcade '83 might be a trivial footnote in the annals of the sport.

McMahon tried to woo Race, then the NWA champion, before the Thanksgiving 1983 event in an effort get him to switch sides, leaving the competing wrestling company without a champion and in a tizzy.

But as he recounted the incident for fans Thursday at the NWA Legends Fanfest, Race said he never seriously considered the offer.

"There's times when you've got to make a decision when it comes from what you truthfully believe," Race told about 500 fans during a forum on Starrcade '83 with Flair. "I had too much respect for myself, not only Ric and the wrestling business, but me personally, to pull that."

Race's comments were among the highlights of the first day of promoter Greg Price's annual convention, which also included a profane, laugh-out-loud session with wrestling manager Jim Cornette.

Pressed by moderator Chris Cruise, a longtime TV announcer, Race declined to get into the monetary specifics of McMahon's offer. But there was little question that it included big bucks, and came at a time when McMahon was working to woo opposition wrestlers like Hulk Hogan to the WWF.

Flair's quest for the NWA title was the centerpiece of a year-long buildup to Starrcade '83, which packed the Greensboro, N.C., Coliseum and represented, Cruise said, the first wrestling event to rely on closed-circuit TV in more than one state for the entire show.

To deprive a deserving Nature Boy of that chance, Race said, "wasn't an option."

For his part, Flair said he was aware of McMahon's overture and praised his old friend and wrestling for helping to keep the NWA and the sport strong for years after the first Starrcade.

"Had that [the NWA title] not come to Greensboro, it would have changed the face of the business and it would never ever had been what it is today," he said.

Race and Flair had wrestled many times before Starrcade, but purposely were kept away from each other in the months before the event to maximize the impact of the encounter. As was typical at the time, they didn't lay out the match beforehand; they just went and worked their craft.

One obstacle kept getting in the way though -- Gene Kiniski, a former NWA champ who was imported from Canada as special referee for the match. Kiniski was out of position frequently, and Flair recounted Race's exact words in the ring to "Big Thunder."

"Some things will never change; you're still a clumsy son of a bitch," Race said.

Race said he considered Starrcade '83 to be a "passing of the torch" to Flair, adding that "politics" at the top of the NWA cut short Flair's first brief run as champ in 1981. "It was probably in my own personal opinion, the best thing that I ever did in the ring. I knew I was passing it to a person who thought as much about it as I did."

In fact, Race was so passionate in his praise of Flair that he called him the "greatest wrestler who's ever walked." That prompted a rare moment of silence from Flair, whose eyes welled up at the mention. After composing himself, Flair said, "I feel like I just got inducted into the Hall of Fame all over again.

Flair and Race also detailed a little known 1984 world title switch with Steve Rickard, a promoter and wrestler in New Zealand. Rickard wanted a brief run with the belt, then planned to lose it back to Flair in Singapore three days later.

The swap went on without official NWA sanction, and Race confirmed it was his idea to help revive a sagging business halfway around the world. As Flair put it: "If Harley Race OK'd it, it was hard for anyone to tell them different."

Race acknowledged he got a tongue-lashing from NWA officials upon his return to the United States, and Flair, usually referred to as a 16-time world champ, had his own spin on it.

Race and Flair spoke forcefully in their support of modern wrestling, declining to take potshots at wrestlers under contract to the WWE, and noting improvements in pay levels and medical benefits, compared with their heydays.

Less magnanimous was Cornette, who now works for TNA wrestling, and said his quality of life has improved since he exorcised the word "McMahon" from his existence.

While respecting the opinions of Flair and Race, Cornette said he thought McMahon spends too much time belittling subordinates for his own amusement, and creating a miserable work environment.

"[Expletive deleted] anybody named McMahon. That's my opinion and I'm right," he said to thunderous applause.

Cornette dodged the question of whether he would accept a job as booker of TNA, which has been undergoing a shakeup in recent weeks, following the departure of Dutch Mantel and Savio Vega from the front office.

"There are few things that you can say 'never' about," he said, as the crowd chanted, "Take the job, take the job."

The only two absolute negatives in his book, he said, include working for a McMahon and flying on an airplane.

"No Arab terrorist has tried to plant a bomb on my SUV," he said.

In my opinion the group below is not the most talented Four Horsemen group ever but it is the Original group and that is important especially being that until this past weekend this group hadn't been together in 23 years. 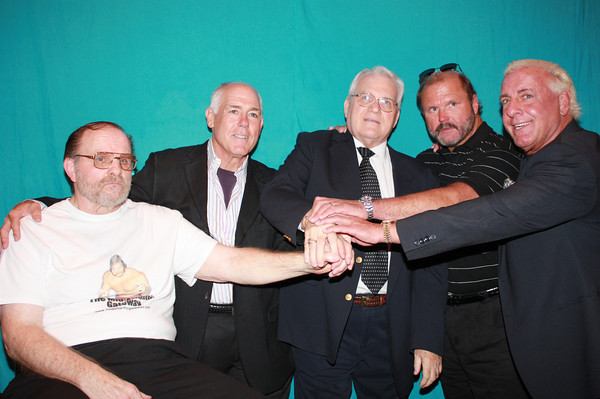 Here are the Original Four Horsemen group with the Great Barry Windham and Baby Doll. Am I the only one who thinks Ole looks uninterested and out of place? 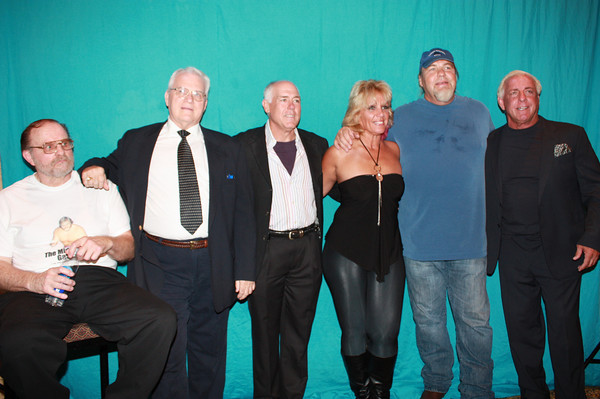 In my opinion the most talented Four Horsemen group in terms of pure wrestling talent was when Barry Windham was in the group. 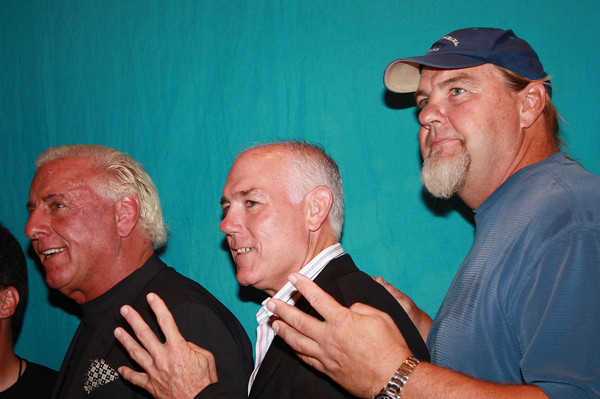 This is Ric Flair and the Legendary Harley Race during a Q and A Session Thursday, Aug. 6 at the Hilton University Place Hotel in Charlotte, N.C. at the NWA Legends Fanfest Convention. 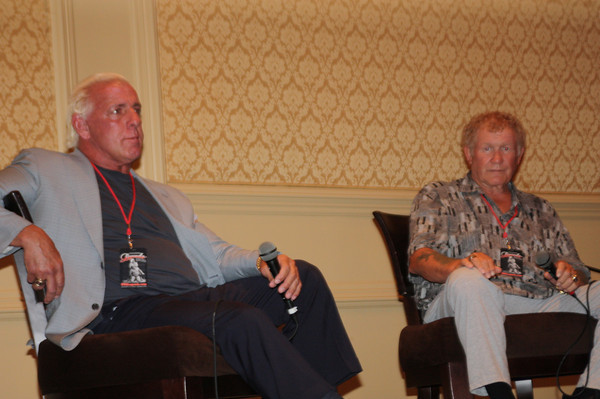 A Great Picture of Ric Flair and Harley Race, Flair once said that "Race" was the Toughest man he has ever been in the ring with. 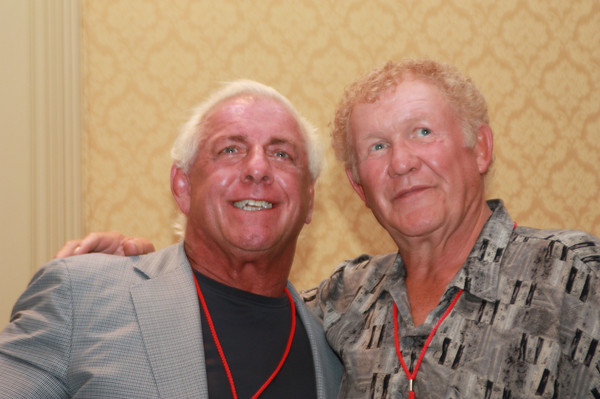